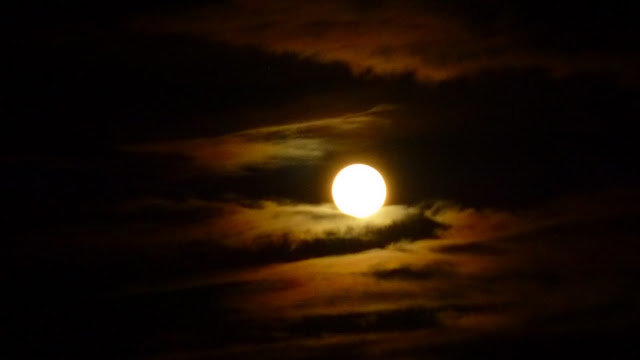 Confession: The other night a writer friend and I mistook the rising moon for the setting sun.

"How," you might ask, "is such a thing possible?" We were driving in a caravan with several other people on darkened roads en route to see the star-filled sky. We arrived at the appointed spot and jumped out of the car, eager to watch the remains of the huge yellowy-orange sun set in the vast purple-black sky starting to fill with constellations. We watched, enraptured, and then my friend and I looked at one another and said, "Wait. Did you see that? Is the sun higher in the sky now? Wasn't it lower a second ago? What's going on?"

No one else seemed to be alarmed by the apparently rising sun at 9:30 at night. We kept watching. We heard someone say "moon." And then we knew. We were watching the rising of the full moon! An enormous yellowy-orange full moon. And we started to laugh. Laughter that doubled us over. Laughter that infected several of the people around us who didn't know what was so funny, but who were happy to laugh along with us. Laughter that made our stomachs hurt. Laughter that didn't stop. The laughter of lunacy.

Earlier that morning this same writer friend and I had been in a situation where someone reminded us to expect emotions to run high and to expect the unexpected because of the full moon. (It fact it seems this particular full moon was such it generated this article: http://www.feelguide.com/2015/06/02/this-week-full-sagittarius-moon-in-mercury-retrograde-is-wreaking-havoc-on-nearly-everyone/) And earlier that evening this same friend and I had been at dinner with a writer talking about the wonderful subtleties and lessons of the movie "Moonstruck". We should have known.

"Those people who recognize that the imagination is reality’s master

we call sages, and those who act upon it we call artists or lunatics."  - Tom Robbins
In the spirit of imagination being reality's master, we've decided not only did the full moon indeed cause our momentary disorientation, but we've also decided it makes perfect artistic sense for creative people like us to turn the rising moon into the setting sun. Why not? More people should try it. And if a flexing of the imagination is accompanied by the uncontrollable laughter of lunacy, even better. Better for our stories and better for ourselves. 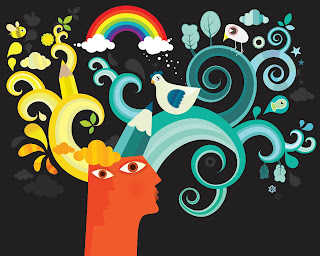 I wonder what my imagination will generate during the next full moon.

And what will your imagination create?

Join me in the lunacy!