The Art of Letting Go in Life and Art

"To live in this world
you must be able
to do three things:
to love what is mortal;
to hold it
against your bones


knowing
your life depends on it;
and, when the times comes to let it go,
to let it go."


When this year began, I knew it would be a year of letting go. How much I’d need to let go of, I didn’t know, but I knew inevitable changes were coming that would force me to face losses of different kinds. That these losses would happen within the same week was a surprise—and an awakening to new beginnings I never could have imagined or planned. 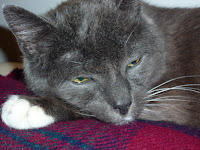 At the end of June, we lost our beloved cat Charley Noble. He had been diagnosed with cancer four years ago and had been defying the vet’s prognosis year after year. Until this spring, when he just couldn’t keep fighting any longer. Charley died in my arms at home on a Monday morning. He’d waited for me to come home from a workshop the night before and then spent the night in my arms. Saying goodbye to our sweet boy was one of the hardest things I’ve ever done. But it was his time. It was our time. To do what had to be done. To hold, comfort, and let our beloved cat go as he took his final breaths was a precious and rare gift. So I let him go.

That Tuesday morning, movers for an auction house packed and removed more than 300 pieces of furniture, crystal, silver, glass, china, collectibles, linens, and jewelry from our apartment. These were items that had been collected by my parents, then left to me after they died. These were items my parents had meant to deal with for years—many items even had brittle post-it notes on them, “To sell” in faded pencil, my mother’s distinctively messy handwriting. But the collections became too much for them and so these items came to me. Until this year I couldn’t find the strength to deal with them and thankfully, because my apartment has storage space, most of these items could stay stored out of sight, out of mind. But the knowledge that I would have to deal with them was always in the back of my mind—and that nagging feeling created in me a sense of anger—towards my parents,  towards the items, towards the work I knew was coming to sort, organize, and decide what to do with each and every item.
It was only earlier this year that I was ready to allow the anger to dissipate, to allow myself to detach from the emotions and the memories. To do what had to be done. What had to be done was to let these items go. So I let them go.

On Thursday morning I met with my trainer Jay at the gym. I was feeling raw from the events of the past few days and couldn’t keep the tears at bay. “I just need you to push me today,” I said. And with a bear hug and a “Let’s do this,” Jay pushed me and I worked out. Before our hour was over, Jay asked me to weigh-in. I’ve been consistently losing weight, getting healthier and stronger since February 2015, but I didn’t know what the scale was going to show me that week. It showed me that I’d lost forty pounds. Pounds that had been slowing me down. Pounds that had been numbing me. Pounds that had been scaring me. I achieved a milestone that week. Did what had to be done. So I let them go.

That week finally over, I was at once exhausted and elated.  And one week later I was out of town teaching a writing workshop with lots of focus on revision. And what is revision? Isn’t revision of our work a method of allowing ourselves to recognize what needs to be changed and adjusted, to do what needs to be done, and to let go? Of course it is. Writers do this all the time. It's often the hardest part and the best part of the writing process. Letting go for the sake of finding the best possible whole. 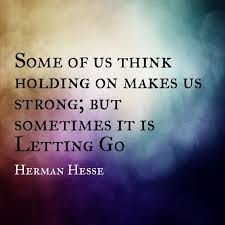 Letting go is sad and letting go is freeing.  Living over-weighted by weight for so long; living in worry and sadness for so long with Charley’s illness; living in anger and angst for so long with inherited items I didn’t want--I can’t shake the notion that letting go of all of it had to happen at the same time. It’s all interrelated and I know I wouldn’t have been able to do the letting go without somehow experiencing all of it at the same time. Coming out the other side my home is change and I am changed. I am freed. I am sad. I am happy. I am whole.